802 or 812 - Saxon Count Bernhard requests that the church which he has founded should be used as a resting place for himself and his wife Christina.
After his death in 826, the beneficiary, Fulda Abbey (founded by Boniface), soon develops the church into a monastery.

851 - The relics of  St. Romanus of Caesarea, Syria (martyr, d. 303 or 304), are transferred here from Rome and kept in the crypt, also accessible to ordinary people.

1209 - The Romanesque basilica is destroyed by fire.
The monastery had been transformed into a collegiate church with canons, but the name of ‘Muenster’ has survived till today.

1241 - The rebuilt church is referred to as St. Boniface for the first time. (see right)

1280 - The church is constantly being enlarged and remodelled - from a Romanesque basilica arises a Gothic 3-aisled church.

1378 - The huge remodelling programme is completed when the southern aisle of the church is finished.

1540 - Beginning of the Lutheran Reformation in Hamelin: Rudolf Moller from Hanover (to become Deacon in Hamelin in 1561) delivers the first Lutheran sermon in the minster.
Although the members of the Collegiate resist the new teaching for a long time, they eventually cede the western/main part of the Minster to the Lutherans.

1576 - The members of the Collegiate have become Protestant and sign a contract with the town. Altars, pictures and the choir-screen are removed, the chancel and an altar are moved to the centre of  the church.

1744 - The central octagonal tower is crowned with a Baroque lantern.

1760 - Due to the development of the town defences, the cloister on the southern side is partly removed. More and more damages become visible.

1803 - Napoleonic troops seize the Minster and use it as an armoury and a stable.
After the retreat of the French there are no resources to restore the church. It is used as a depot and almost falls into ruin.

1848 - Abolition of the foundation (collegiate community).

1870-1875 - Conrad Wilhelm Hase from Hanover is commissioned with the rebuilding of the church. The damaged northern nave is renewed, the central tower secured, and the windows and doors as well as the flagstone floor are replaced. The interior fittings are in Neo-gothic style.
A new organ is installed. The bells are now in the west tower.

1921 - After the biggest bell had to be given away for war purposes in 1917, three steel bells are consecrated, the heaviest being a donation.
Two of the remaining bronze bells, Osanna of 1466 and St. Boniface of 1663, now strike the time from outside the spire (east side) of the west tower.

1970-1976 - Extensive security and restoration works, structural improvements for a modern church interior to the plans of the architect Friedhelm Grundmann. The western tower is re-opened and used as a baptismal chapel, with modern windows by Prof. J. Schreiter.

1980 - A new organ is installed by the Marcussen Company at Apenrade (Denmark).

2007 - The minster community acquires a wooden sculpture by Guenter-Heinrich-
Peter Schulz, artist at Obernkirchen, of 1992-95, paid for by donations.
It is placed directly above the altar.

Romanesque design - a clothed, blessing Christ,
inspired by a crucifix of the Batlló collection (Barcelona).
2007-2008 - Restoration works and repainting of the interior.

2012 - Manifold events to celebrate the 1200th birthday of the church;
Motto: "Licht am Fluss"  (Light upon the River)
(For more information click Jubilaeum 2012 on the right.)
After 1235 Romanus is mentioned as “our patron” in the Hamelin Calendarium.
Why is Hamelin Minster not named after this patron but after Boniface?
You will find a detailed, illustrated treatment here:


Article about Romanus
(in German)

If interested in the history and development of the minster, you can purchase the Blue Book

(in German, with many pictures), either
in the church or at various bookshops
for 5.00 Euro.

In the church is also available a small booklet for 2.00 Euro,
also in German only.

The Founder Stone shows the donors Count Bernhard and his wife Christina of Engern and Ohsen, presenting the minster. 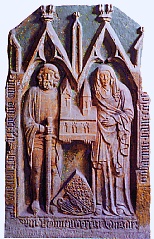 The Madonna relief (about 1410) presents Mary, crowned as celestial queen, with the Jesus child, standing on a full moon, surrounded by angels playing various musical instruments.

“And a great sign appeared in heaven:
a woman clothed with the sun, with the moon under her feet, and on her head a crown of twelve stars.” (Revelation 12, 1)

In the jubilee year 2012 there were manifold events – you will find pictures and texts here:


There is available a documentation
(100 pages, in German), with lots of pictures and illustrations, in the parish office in Emmernstrasse 6.